They are the life insurance for professional groups such as the fire brigade, workers in the chemical industry, and maintenance teams for shafts and tanks: gas warning devices for personal protection. One of the world's leading manufacturers is Dräger, which is based in Lübeck, Germany. Franconian support has been used there for software development since 2020.

No ship can leave without them: staff captains are responsible for safety and much more on board. Andreas Slowish is a staff captain. He knows all the systems on the MS Artania, every hatch and hidden corner. This includes the ballast water tanks, which keep the ship in balance. Before he and his crew enter the tanks to perform regular maintenance, they ensure that the oxygen concentration inside is correct. In addition, each person carries a small device that constantly checks the room atmosphere and sounds an alarm if the oxygen content falls below a critical limit.1

Andreas Slowik’s gas detector comes from Dräger, one of the world's leading manufacturers of safety systems. Dräger offers different models of gas detectors for different fields of application. Among them is the X-am 5800 – a combination of two existing models. This new model is intended to be compatible with Dräger's range of accessories. This includes, for example, an external pump which can suck air out of a tank via a hose and feed it to the device. This allows it to measure the atmosphere in the tank before anyone enters the danger zone. To measure the gas, the new model is equipped with four slots, which customers can use to equip the device with various gas sensors. Optimised device software is designed to reduce power consumption, thereby rendering the gas detector fit for 12-hour shifts, while at the same time offering a Bluetooth interface. It also enables smartphones to read and record device data.

A scrum team of up to eight people at Dräger is currently working on the new software for the gas detector. They receive support from four infoteam workers: Alexander Barenbaum, Frank Maier, Jens Breuter and Dr Markus Schleicher. The latter acts as both an infoteam project manager and developer. For the project, he has been working specifically with DIN EN 50251, the safety standard for detecting gases. The entire team works according to Dräger's processes, which already cover the standard. Nevertheless, as a kind of safety net, Markus must ensure that infoteam is also following the appropriate standards.

The software of one of Dräger’s other gas warning systems is used as the basis for developing the device software. However, since this system has, for example, more slots and a colour display instead of a monochrome display, the development team has to adapt the software to new conditions and integrate new modules such as the Bluetooth interface. A substantial part of the programming takes place with C++ and Python; C is used at the driver level. For their work, Dräger has equipped all project personnel with gas detectors so that they can test each software module immediately. In the meantime, a closely interwoven team consisting of Dräger and infoteam employees has formed, in which everyone takes on tasks on an equal footing, works together, coordinates and jointly drives software development forward. The infoteam team has played its part in this; after minor initial difficulties, it has grown into a tight-knit community. And, who knows? Maybe the team not only has the right flair for software but also for projects: After all, a joint excursion on the MS Artania with Staff Captain Andreas Slowish is a must for this project…

1 The scene described comes from the ARD documentary ‘Verrucae nach Meer’ (Mad about the Sea), episode 288, from 16 minutes and 38 seconds. In it, the Dräger X-am 2500 is shown and explained. 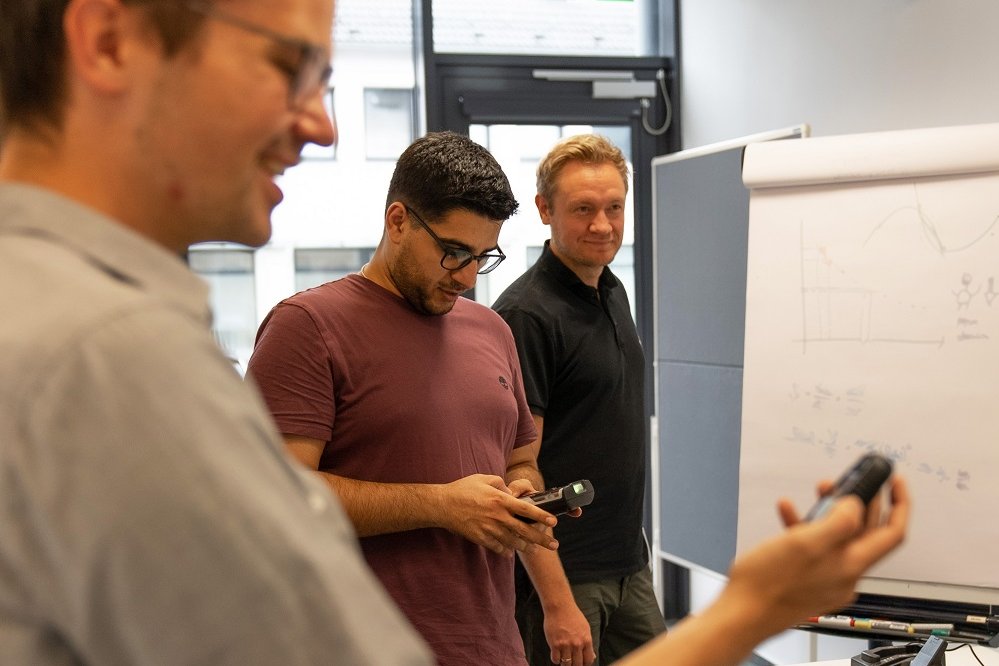 Dräger gas detectors under test - with standard-compliant software from infoteam.