Schuler Pressen GmbH is the technology and world market leader in forming technology - and cooperation partner of infoteam.

The use of presses is suitable for cutting blanks for sheet metal forming, especially in mass production. With small batch sizes, on the other hand, it leads to many tool changes, costly tool maintenance and tool storage. Schuler Pressen GmbH, based in Heßdorf in central Franconia, Germany, among other places, has responded to this situation and created a future-oriented technology with its laser cutting lines - for which infoteam and Schuler are developing an important software platform.

Michael Lierheimer as project manager and Bastian Mattes, Carola Touchy, and Felix Deichsel from the development team exchange ideas with Jan-Peter Große and his colleagues from Schuler Pressen GmbH every three weeks. In a sprint review, the completed development steps are discussed together and future tasks are planned in a sprint planning.

Schuler Pressen GmbH is part of the Schuler Group, the technology and world market leader in forming technology and the world's largest manufacturer of presses. These presses are used wherever sheet metal is formed in large quantities - for example, car body panels in the automotive industry or kitchen sinks. The starting material is cut-to-size sheet metal, so-called blanks, which have also been produced on presses to date. They also represent an economical solution for mass production. However, small batch sizes are increasingly in demand nowadays, where presses are not very efficient. In response to increased industrial requirements, Schuler has developed a forward-looking technology: laser cutting lines. They can cut different materials very precisely by laser at low cost (since they are tool-free) and at high processing speeds. At the same time they are highly flexible in terms of contour design.

Each line includes a programming station where the contours can be loaded from a CAD model, modified and optimized. With this data, the lasers receive the coordinates for their work. In the past, users had to use several software tools in succession for this purpose - not in keeping with the times, those responsible at Schuler felt, and wanted to simplify handling considerably: In the future, customers should be able to load, change, and optimize all data and export the final coordinates in the appropriate file format in an uncomplicated and intuitive manner with only one modularly expandable software. This vision gave rise to the collaboration with infoteam about two years ago - above all because infoteam has confirmed its reputation in the rather conservative mechanical engineering sector for developing modern and future-proof software tailored precisely to the needs of its customers and their end users. "Together with Schuler, we defined the software requirements in a workshop", Bastian Mattes remembers the project start. Building on this, the infoteam developers then defined the entire software architecture.

Step by step, the desired functions of the software are now being developed. This is done according to "Scrum-and-V". What sounds like a contradiction actually combines the advantages of the classic V-model with those of the agile Scrum process. This combination lends itself to mechanical engineering. The boundary conditions are firmly defined, but the development itself takes place agilely in small Scrum sprints. This allows the team to react very quickly to changes. At the same time, this approach is the key to a special feature of the project: two teams work in parallel on the software - one at Schuler and one at infoteam. "Such a procedure was new for our customer," Bastian recalls, "but the cooperation works out excellently thanks to Schuler's openness to innovative and agile development processes. 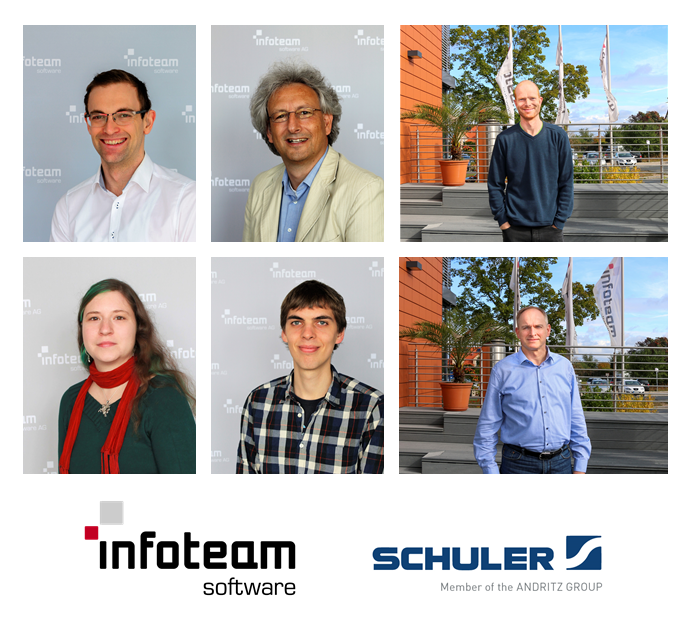 Schuler also relies on infoteam's technological expertise. Of course, there are clear guidelines for the functionality of the new software, "but we have a relatively free hand in choosing the appropriate technologies and the best development method," says Bastian. A good example of this is the solution specially programmed with WPF for displaying the CAD model with up to 5,000 elements. "The WPF standard tool is not very suitable for this high number of elements and is much too slow. With the solution developed by infoteam, things are now much faster.

Feedback from participating Schuler employees on the infoteam cooperation:

Oswald Schönberger (Product Manager Cutting Lines, Schuler Pressen GmbH): "Modern mechanical engineering requires professionally and future-proof developed software components. We were therefore looking for a development partner who stands for high-quality, state-of-the-art software development and who has a deep understanding of our industry and mechanical engineering. infoteam has an excellent reputation in this field and has been helping us since the beginning of the cooperation to implement our very high quality standards in terms of software.

Jan-Peter Große (Project Manager, Schuler Pressen GmbH): "It is high time to question many traditional approaches to classical software development in mechanical engineering and replace them with new impulses. We were therefore very pleased that infoteam was able to rely fully on agile development methods that were new to us - an exciting step for us, which is very successful and forward-looking".